The performance of a T-shaped diaphragm wall supported 9.7m deep excavation in Taiwan is compared to an analysis with our DeepEX software. The original excavation performance was presented in a paper by H. Hsii Sheng Hsieh, et. al., 2011 (Journal of Geoengineering Vol. 6). The deep excavation was supported by T-shaped diaphragm wall with partial implementation of the top-down bracing method, Figure 1 presents a plan of the excavation as reproduced from the original publication. 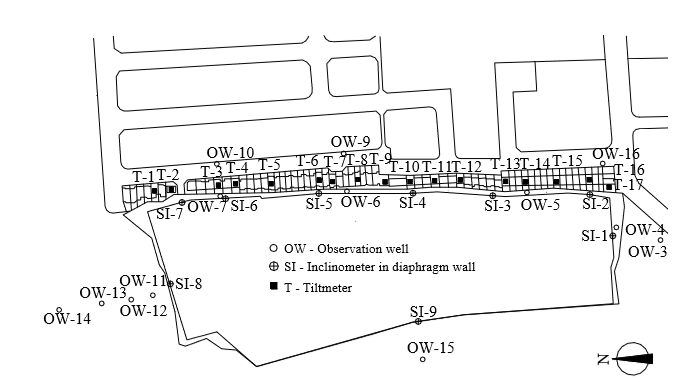 On the eastern project boundary a series of buildings were abating the excavation. Groundwater was located at a depth of 5m. Construction sequence involved the following phases:

A) Construction of the diaphragm T-wall.

B) Excavation with berms to the final subgrade within the site center. Berms were maintained at a 1 to 1 slope.

C) Partial construction of the building within the excavation

E) Removal of the soil berms to the final excavation subgrade

The initial geotechnical investigation did not establish any sort of guidelines or soil design parameters. For this reason the authors resorted to a series of parametric analyses. Their initial analyses indicated maximum displacements of the wall as much as 60mm, that could be reduced to approximately 25mm if greater soil strength was assumed. The authors then attributed the better behavior to possible sliding resistance and 3D mass effects of the T panel. Figure 2 presents an a project picture during the soil berm excavation and before the building core was constructed. 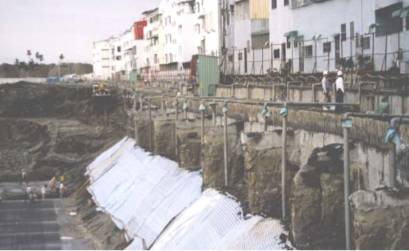 Figure 2: Diaphragm wall excavation during the berm phase before the supporting basement floor slab was constructed

Upon review of the case history data we realized that construction of the 1 to 1 soil berms meant that the gravely-sandy soils on the site had considerably greater strength than what was stipulated in the original publication. This observation was further supported by Figure 2, where, in the background we can observe that the natural soils were standing at slopes greater than 45 degrees. We thus assumed sufficient soil strength that would in theory justify the observed stability of the 1 to 1 soil berm.

We then proceeded with these assumptions and simulated the excavation with our DeepEX software. This modelling included the T-panel diaphragm walls, the berm excavation, the building, and the basement floor slab. With our first run we were able to get lateral displacements that practically matched the measured wall displacements. Figures 2 & 3 show the DeepEX models with lateral displacements, bending moments, and lateral soil stresses for the phase B) and phase E). From the results we can see that the E-W displacement difference was captured extremely well in our DeepEX analysis. Figure 4 presents critical inclinometer displacement results that compare extremely well with our DeepEX analysis.