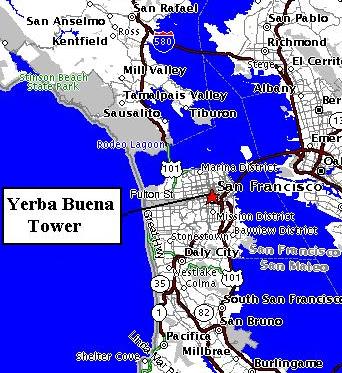 The Yerba Buena Tower (or CB-1 Tower) project is located on the south side of Market Street between Third and Fourth Streets, in San Francisco California. The project encompasses a flat area of 205' by 210' in dimension, where a 7-level, 66'-deep basement has been constructed.

Slurry walls were selected for temporary and permanent support of the excavation, mainly because important adjacent structures had to be protected. In specific, BART and MUNI tunnels are located beneath Market Street to the north of the project. The Marriott Hotel, located to the west of the site, includes two underground parking levels. A six story brick building with one basement level (735 Market Street) is located along the northeastern project border while a two story former PG&E substation is situated along the southern project side.

The San Francisco Bay Area is in the California Coastal Range Province, a region characterized by northwest-trending ridges and valleys that generally parallel the major geologic structures such as the San Andreas and Hayward fault systems. The Bay Area bedrock is composed of highly consolidated, tectonically deformed, sedimentary, volcanic, and metamorphic rocks of the Franciscan assemblage. Franciscan rocks are closely associated with large bodies of serpentine. The Franciscan rocks usually consist of sheared shale and sandstone, with isolated masses of other rock types that are referred to as melagne.

There are three major active faults in the San Francisco area: San Andreas, Hayward, and Cavaleras faults. The closest of these faults to the site (8.5 miles) is the San Andreas fault which is capable of Richter scale 7 devastating earthquakes, thus seismic loading was a major consideration for the new tower.

The bedrock at the site belongs to the Cambridge Argillite formation and it is highly altered, containing zones of clay-like kaolinized material. Thickness of these clay-like "soil" zones may vary from a few inches to hundreds of feet (2). 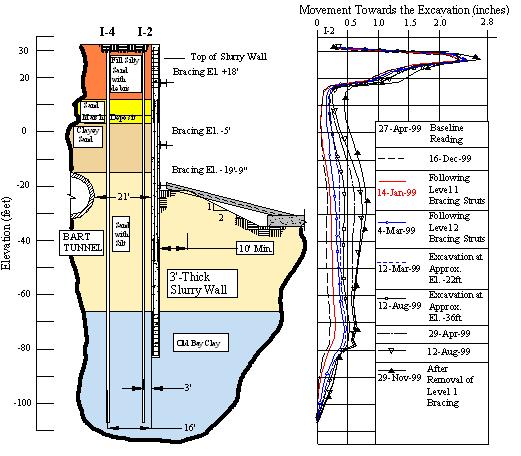