Analysis of a 50ft deep excavation with different methods

Deep excavation design poses many uncertainties. One of them is the selection of the appropriate design method. Very often braced excavations are designed with a classical approach that involces "limit-equilibrium" or apparent earth pressures. In this approach, earth pressures are assumed and support reactions are calculated from some form of beam analysis. Some popular methods of analysis are:

Each one of these methods involves some assumptions. The FHWA method for example assumes that virtual fixity is achieved at the subgrade. The simple span with negative moments and Blum's method assume that the soil provides a virtual fixity at the point of zero net horizontal loading below the excavation subgrade. FHWA performs a simple span analysis, whereas method b) above arbitarily reduces moments by approximately 20% to account for negative bending. Blum's method in its original application with active earth pressures ignores arching and assumes active pressures.

A 50ft excavation with one soil layer was analyzed for each of the previously described methods and obtained results are compared. Supports are assumed at 8ft, 20ft, and 34ft depths. For practical purposes one soil type is assumed with a unit weight of 120 pcf, c'= 100 psf, and a friction angle of 30 degrees. Apparent earth pressures are calculated with the FHWA approach which in essence is redistributing 1.3 times the active thrust as a trapezoid. 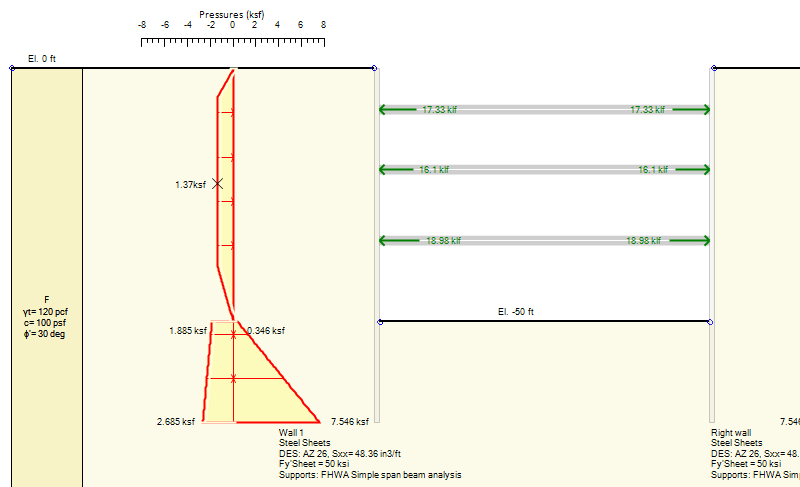 A sample apparent earth pressure diagram is presented below:

The limitation of each of the above methods is that they totally ignore all staged construction effects. Thus our last step to evaluate the excavation is to perform a non-linear elastoplastic analysis. In this type of analysis prestress levels are assumed and wall displacements are based progressively on the preceeding stage. The results of this analysis produce support reactions that are in between methods B) and C) and wall bending moments that are greater than all the preceeding methods. However, Blum's method in this case predicts the greatest bending moments as negative.

Concluding, while Blum's method appears to overpredict support reactions wall bending moments may be more realistic than with other methods. Similar bending moments to the non-linear analysis can be also produced by following an adaptation to the apparent earth pressure method according to a publication by Konstantakos. The non-linear analysis methods predict greater wall bending moments and support reactions between the simple span and Blum's method for the lowest two supports. Thus, it is always advantegous to review braced excavations with different analysis methods to establish the most critical design forces.