This case examines a 34m deep excavation with three stepped bored pile walls braced by a series of ground anchors. The excavation is in soft type rock material with an effective cohesion of 25 kPa and a friction angle of 35 degrees. The wall consists of 0.8m diameter bored piles at 2.0m horizontal spacing. The 1st and 2nd benches are at 12m and 24m depth respectively.

The excavation is analyzed with finite element and limit-equilibrium analysis methods using the DeepEX 2019 model. In limit-equilibrium methods, apparent earth pressures with FHWA and EAB are both examined. Interaction effects are also taken into consideration between the upper and lower walls. Traditionally, engineers assume a portion of the passive pressures from an upper wall acting as additional load on the front walls. When wall embedment safety factors are more than adequate (even with minimal wall embedment), a common approach is to adjust the additional impact loads to reflect closer operating conditions. A finite element simulation is also performed to consider a more detailed interaction between soil and structures. The comparison between the two models is summarized below:

Reviewing only the overall critical results could lead one to conclude that the results are similar. Upon closer inspection the LEM approach shows smaller loads in the upper wall and cannot recognize prestress forces in the 2nd row of ground anchors at each wall. As a result, the LEM approach in this case can only be considered as a rough guide or back check. The FEM approach on the other hand is able to capture the accumulated displacements on the upper walls as a result of subsequent excavation progress. 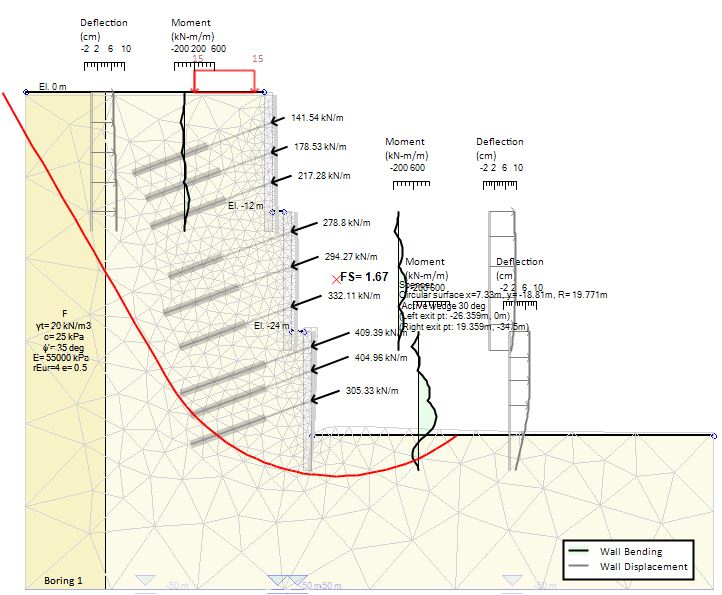