The Water Tower Place consists of a 74-story tower with a contiguous 14-story commercial building, both of reinforced concrete and with four levels of underground parking. The site is located at the northeast corner of Michigan Avenue and Pearson Street The excavation for the parking covered an area of 530' by 212' and extended to 44' below the surface.
Slurry walls 30"- thick, 62 ft deep, spanning between the shafts of foundation perimeter caissons were used as the basement walls. The caisson shafts were designed to carry part of the lateral load. Two levels of bracing were provided: one level of tiebacks at 11' from the top of the slurry wall, and a lower level of inclined rakers at 27' below the top. The slurry wall was designed to span between the perimeter drilled caissons. The drilled caissons supporting the slurry wall are spaced 30' to 31' of center, most having a 5'-diameter and an 11' bell at the bottom. The caissons were designed to resist part of the earth pressure and act as cantilevers. Slurry wall panels, 25' to 26' long, were constructed in between the caissons. Details of the slurry wall excavation can be seen in Figure 5.12.

Soil conditions in the site were typical of downtown Chicago: 7' of fill, 18' of fine sand (SP), 30' of soft to tough silty clay (CL), over very tough to hard clay (CL), and hardpan. The soft clay has undrained shear strength su = 0.4 - 1.0 ksf, increasing with depth.

The tiebacks were inclined from 10.3° to 17° in order to obtain a grouted zone of 10' to 20' within the sand stratum. All ties were regroutable with a design capacity of 60 Tons each. Five tiebacks and two rakers were installed in each slurry wall panel. The rakers had a design capacity of 225 Tons each, with one raker placed at a drilled caisson and another placed midway between caissons.

Out of the 174 ties, 14 did not obtain the design capacity and had to be regrouted to give acceptable results. All ties were locked off at 60 Tons but load picked up from 63 Tons to 75 Tons. Tieback loads remained at prestress levels while the berm was not removed. All tiebacks were cut-off once the ground-floor slab was in place. The average maximum raker load was 200 Tons, slightly less than the 225-Tons design capacity. Readings taken at the longest diagonal strut at the northeast corner showed an axial load varying from 31 Tons to 181 Tons, with a design load of 320 tons. It was believed that soil arching partly caused the smaller observed load.

Offset surveys indicated that maximum wall movements at the top of the wall were in the range of 1" to 3". Lateral movements as measured from the surveys were smaller than inclinometer measurements at the top of the wall. Inclinometer deflection data is displayed in Figures 5.13 & 5.14 (Gnaedinger et al., 1975). Maximum soil movement as determined by inclinometers was slightly more than 6", but most were less than 2" throughout the depth of the inclinometer casing. These large movements at the top the casing most likely reflect fill sliding under the guidewalls or other surface construction activities. The bottom of the slurry wall translated by as much as 1.2" towards the excavation, which emphasizes the importance of adequate embedment into a stiff stratum for controlling such deformations.

Wall movements were more or less observed throughout the wall perimeter. This indicates that the wall actually spanned across the drilled caissons as designed. Lateral movements were increasing as the excavation progressed. The effect of tieback prestressing can be seen in the sharply bent deflection shapes at the tie elevations. Raker prestress did not seem enough to prevent the bulging deflections that occurred in most locations. Apparently the raker prestress level was not high enough to prevent such a condition.

Under 200 tons with a 50-ton prestress the calculated elastic yielding is close to 0.21" for each raker. This means that the average maximum stress on each steel pipe was 14 ksi. This calculation was made assuming that the rakers were under compression only. Apparently the walls deflected much more than the 0.21" at the raker elevation, which suggests that either the base slab shortened under the raker load or that the rakers actually slipped to accommodate for the typical 2" observed movements.

Settlement observations were only made at distances greater than 20' to 40' from the wall. At points within 40' of the wall settlements were in the order of 1.5" on Pearson, Seneca, and Chestnut Streets, and 0.5" on Michigan Avenue. On Chestnut and Pearson Streets maximum settlements at 60' from the excavation were about 1inch. At the same distance the maximum settlement at Michigan Ave. and Seneca was close to 0.5". At this project there were little to no movement during caisson construction since the perimeter caissons were provided with steel liners, and cement grouting was used to seal the space between the liner and the excavated hole. 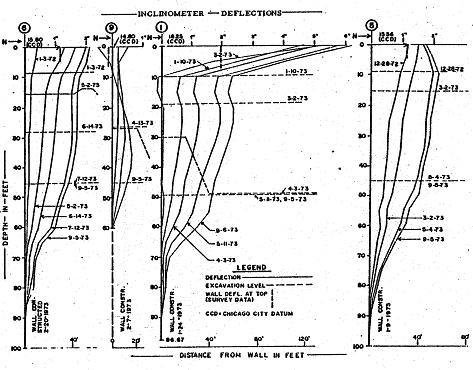