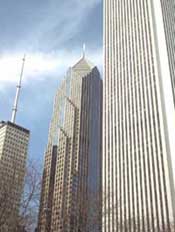 The Prudential Two is a 60-story high-rise located in the southwestern corner of Stenson Avenue & Lake Street. The new building was constructed next to the pre-existing 41-story Prudential building at Randolph & Stenson Streets. Five levels of parking were constructed under the tower portion of the site. Three out of these parking levels are below the lower street level at Stenson Street (eastern side). Stenson Street has three levels with the lower being at El. +6'2"CCD, the mid-level at El. +26'CCD, and the upper at varying elevation close to El. +46'ft. To the north of the project there is the 80-story AMOCO (Standard Oil) building constructed during the 70s with its basement constructed using slurry walls (diaphragm walls) as well.

A plaza area occupies the northwestern portion of the site.

Slurry walls 26"-thick, 56'-deep, formed the walls for the 3-level basement (base of the excavation at El. -21'3"ft CCD). Tiebacks, rakers, and corner braces were used to brace the slurry walls during excavation. On the north wall a tie-rod and deadman sheet pile system was used in place of the simple tieback bracing because of space restrictions. Tiebacks at 6' depth, inclined at10° from the horizontal and prestressed rakers to 100 tons placed at the second level provided additional support for the east and north slurry walls. The south slurry wall was braced by tiebacks inclined 45° at El. -10ft CCD at the slurry wall face, with fixed length within the hardpan stratum.

Steel H-Beams placed at regular intervals reinforced the slurry wall together with reinforcing steel cages that provided additional tensile strength. Drilled caissons extending to the limestone bedrock were used to support the superstructure loads from the 60-story tower.Geologically the site lies in a portion of the city that was once below the lake level. The soil profile generally consists of fill, underlain by fine sand, stiff clay, soft to medium clay and stiff to very stiff clay extending to a sandy clay "hardpan" at El. -70ft approximately. Extremely dense silt with variable amounts of cobbles and boulders was found above the surface of bedrock to elevations in the range of El. -90 to El. -100 ft. A deep groundwater table (El. -60'CCD) exists at the site and is associated with the water level in the rock and the dense silt below the hardpan. A shallower perched water level within the sand soils ranged from El. 0' to El. -3'.

Horizontal soil movements slowly increased while the excavation progressed. Generally most of the movement happened after the soil berm was left in place and the first level ties were tensioned. The final inclinometer reading was taken when most of the rakers were jacked.

Overall, the earth retention system performed very well since the basement excavation caused very small horizontal movements and probably small settlements as well. Actual settlements although not measured but must have been small as well if we consider that maximum lateral soil movements reached up to 0.75".