The Northwestern University Parking Garage is a twelve level structure bounded by Superior, St. Clair, and Huron Streets. Olsen Pavilion of Northwestern Memorial Hospital occupies the eastern portion of this block. The garage includes a relatively deep (23'), single basement level for loading dock facilities. Slurry walls were used to construct the basement walls of the new garage structure. Caissons were constructed in between slurry wall panels since the slurry wall bearing capacity was would not have been sufficient to carry the superstructure loads. The soil profile at the site is typical of downtown Chicago. Street level at the site is approximately at elevation El. +13 CCD (Chicago City Datum).

Most slurry wall panels were close to 18' long and 39' deep, all being 2.0' thick. Bracing was provided by temporary tiebacks installed at El. +3.0 CCD at 14° inclination from the horizontal. Two tiebacks were placed near the caissons with a typical 4'3" horizontal spacing. Measured data was available until the site was thereafter excavated to El. -4.5ft CCD, after which there were no more available data regarding the performance of the retention system. It is known that the final excavation reached El. -7.0ft CCD.

Excavation to 11' below street caused soil to move towards the excavation by as much as 0.35", while tieback installation reversed deflections by as much as 0.15". Thereafter soil movements slightly increased as the excavation progressed to 17.5 ft below street level. The upper 2' of all inclinometer casings deflected more than the remainder portion of the casing, whereas 4' below the deflection was much smaller (Fig. 5.24). Most likely this additional deflection was caused by backfilling against the casing.

There were numerous locations where seepage was observed at the joints between caissons and slurry wall panels, despite the care had been taken to construct watertight joints. These leaks were to be repaired with grouting or another sealing method.

In several areas wet bentonite was observed along the wall which was later removed. In addition several voids were observed at the slurry wall face that had to be patched with concrete. Although all of the above needed repair work was probably minor, it does clearly demonstrate that an increasing the number of construction joints increases the chance of water leaks through the slurry wall, and thus should be avoided. 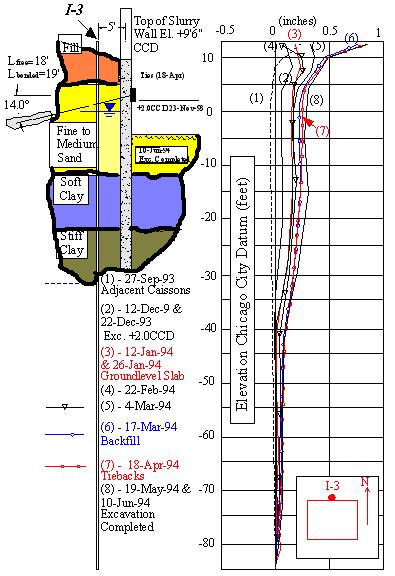