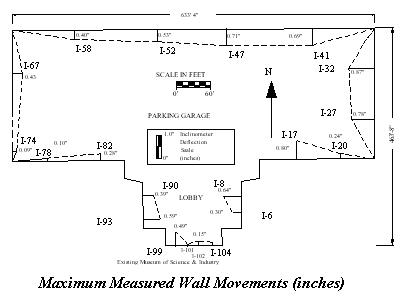 The Museum of Science and Industry is located in 57th and Lake Shore Drive. An underground 3-level parking was constructed adjacent to the northern side of the existing Museum Building as to satisfy parking needs. Slurry walls 2.5'-thick and 45'-deep braced with three levels of permanent tiebacks were used to construct the underground parking. Tiebacks were air-drilled and extend into the hardpan soils with the grouted body being about 60' away from the slurry wall face. The excavation was 34'-deep and covered an area of 633'x 278' for the parking and a smaller lobby section on the south.

The site of the Museum is located on reclaimed land from lake Michigan. Soils in the site consist of 20' of sand fill, over 20'-thick medium to stiff clay, and very stiff clay for the next 20' feet The water table at the site is controlled by the lake water elevation, which is at El. +3 ft CCD. Borings did not penetrate more than 60' of soil but it is known that "hardpan" soils exist below that depth. Clays at the site have larger unconfined strengths than downtown Chicago clays. The medium clay at depths of 20' to 40' has typical unconfined undrained strengths slightly more than 1.0 ksf (sU UU value) whereas for downtown clays unconfined shear strengths range from 0.3 ksf to 1 ksf at the same depths. Clays at depths of more than 40' typically had unconfined undrained sU strengths in the range of 2.0 ksf to 5.0 ksf.

Maximum slurry wall deflections were kept to small values throughout the excavation period. Most monitored slurry wall panels deflected up to 0.5" with some panels deflecting up to 0.87" (I-32). Maximum wall movements were observed above or close to the second levels of tiebacks. Slurry walls generally rotated about their base with slight bending observed above the second level of tiebacks. In some locations, approximately half of the total measured deflections might have been caused by the extensive grouting efforts that were undertaken to seal water leaks (i.e. 0.4").

Injection grouting was used to repair water leaks through slurry walls during excavation. It was mentioned that in many locations this grouting caused the wall to move laterally up to 0.25". The exact locations where these grout induced wall movements were observed are not known but inclinometer deflections increased considerably after the 3rd level of ties was installed. It was also reported that the southeastern re-entrant corner from I-17 to I-8 had seriously cracked during the excavation and that repeated grouting had attenuated this cracking.

During the installation of the second level of tiebacks in the southeast corner of the construction site, cracks were observed in the asphalt concrete pavement and the concrete slab supporting the observation tower of the Museum. These cracks were situated approximately 20' to 35' further south from the slurry wall in which the tiebacks were being installed. Tieback installation in this location started on Oct 21st and progressed easterly to panel 18 by Oct 23rd. During this period cracking was observed as the tiebacks were installed. According to engineers present at the site, the platform of the tower raised in elevation by approximately 0.5" and then later in the day it settled back about 0.25". Inclinometer I-17 in that location indicated that movement at the top of the wall towards the north was in the order of 0.38". It was believed that drilling with air through the stiff to very stiff clayey soils resulted in incomplete removal of the clay cuttings between the drill pipe and the side of the drill hole thus not allowing air pressure to escape (field report). 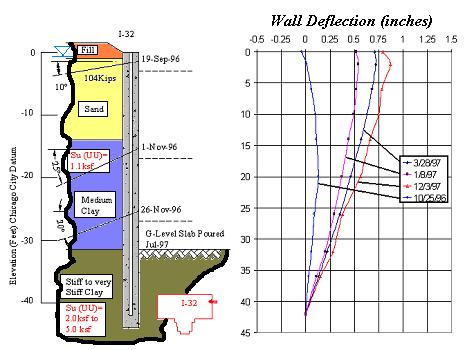