The Beacon Guest Quarters Hotel is a 30-story reinforced concrete structure with a three level basement constructed with the top/down method, located at the southwest corner of E. Walton Place and N. Mies Van der Rohe Way in Chicago, Illinois. Drilled and underreamed caisson foundations support the building and a slurry wall earth retention system was used as the basement wall.

Soil conditions are typical of downtown Chicago. The upper 15' of soil consist of miscellaneous cinders, rubble, and sand fill. Silty fine sand of medium dense to very dense relative density underlies the fill to a depth of 30' below the street level. A very soft to stiff, gray, silty clay exists to depths of 60'. At a depth of 85' the clay becomes very stiff to hard. Underlying these silty clay strata, hard to very hard sandy clay (hardpan) was encountered and extended to the maximum of the borings (112'). However, moist to wet silt and sand layers were encountered within the hardpan material. The long-term hydrostatic water table is located at an approximate depth of 12' to 14'.
There is also an abandoned 10-ft diameter water tunnel crossing the site at 100' depth. Once the slurry wall was constructed the section of the tunnel crossing the site was grouted in order to avoid collapse from the caisson loads. 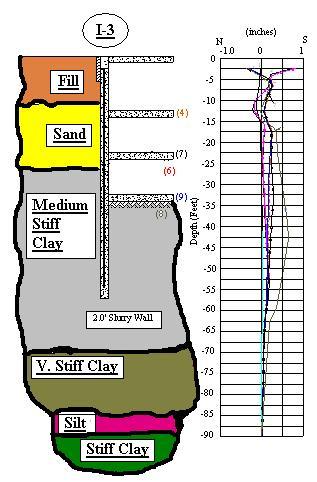 A reinforced concrete slurry wall was selected as the earth retention system for the three-level basement. In addition, the 2-foot thick slurry wall was theoretically able to carry wall loads in the order of 5 to 110 kips per foot. The slurry wall penetration ranged from 58' to 90' below grade depending on location (90' being adjacent to the University of Chicago Business School).

Immediately to the west of the site there is a 12 story high-rise structure with a one level basement. This structure is the Knickerbocker Hotel located at 163 E. Walton Street. The low-rise structure south of the hotel was a one level kitchen above ground, with a single mechanical room below. The University of Chicago Business School is located to the west of the site at 190 E. Delaware.

The top/down slurry wall excavation at the Guest Quarters Hotel performed well. Overall final wall deflections were in the order of dH=0.6" and only in one point did they reached dW=1.0" . Caisson construction caused the slurry walls to deflect by as much as 0.35" inwards, with typical induced movements being smaller. Surprisingly, one inclinometer had the greatest deflection of dW=0.97" in the cantilever phase when the first level of excavation was reached (about 15' below street). Movements at that location a sharply decreased to dW=0.5" when the second level slab was completed (24' below street).

There are no settlement data available, thus actual settlements are not known. Settlements could be expected to be in the same magnitude or less than wall movements if we consider that the top-down construction method was used.

The granular nature of the rubble fill caused problems in the guidewall construction. Vibrations from the street caused some guidewall trenches to collapse as they were excavated. This caused a section of the curb along Mies Van der Rohe Way to slough into the excavation. It was decided to use soldier piles and wood lagging on parts of the exterior slurry wall face as to avoid this situation again.

Slurry leaked into a basement when panels were trenched in the northwestern section of the project. The slurry leak into the Knickerbacker hotel occurred about 12 ft below street level, where the retained soil consists of rubble fill This demonstrates that running fills running (i.e. very permeable) may not be able to form an adequate cake filter. Guidewall construction can be a little problematic due to vibrations from street traffic. Street vibrations caused soil collapses in this project required that the guidewalls were constructed to a greater depth.