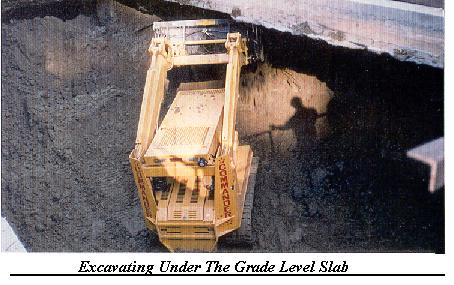 The Beth Israel Deaconess (BID) Hospital is located in the corner of Longwood and Brookline Avenues in Boston Massachusetts. The building consists of a 4-storey low-rise area and a 18-storie high-rise section. A 5-level underground parking garage was constructed under the building using the up/down construction method. The Massachusetts College of Arts building (MCA) previously occupied a major portion of the site. This added to the complexity of the project since the facade of the MCA building facing Brookline Avenue had to be incorporated to the new BID building. The foundation perimeter walls were constructed using the slurry trenching method (slurry walls) with a saw-toothed configuration.

Five major soil strata and two major rock units were encountered in the test boring program conducted for the BID project namely: 6'-15' miscellaneous fill (SPT<15 bpf), over 10'-36.5' of loose to very dense medium to fine sand (30<50), 25' to 64' marine clay (BBC), 3'-10' glaciomarine deposits, and either Argillite or Conglomerate bedrock. The soil conditions at the site are usual of the glacial past of the Boston area and the soil profile can be classified as profile B according to Johnson [1989].

The top/down construction method required that deep foundation units were installed prior to the general excavation. Load Bearing Elements (LBE) were used to support the basement columns. LBE's were designed as to utilize both skin friction and end bearing. The reinforced concrete diaphragm (slurry) wall served both for temporary and permanent earth support of the basement area. The below grade garage floors provided temporary and permanent bracing of the slurry walls. The walls were embedded a minimum of 3ft into glacial till in locations where the walls carried vertical loading from the superstructure. An allowable pressure of 30ksf was used for slurry wall bearing design. Slurry wall panels were typically 20' long with most panels at the northern, eastern, and southern sides of the project 2.5' thick, while some other panels were 3.0ft thick

Horizontal wall movements in this project were moderate to small. Maximum wall deflections ranged up to 0.88" at LL4. Most of the wall deflections occurred after the excavation reached below the third or the fourth garage level. At the final stages in the Brookline Avenue slurry wall the point of maximum wall movement occurred between the fourth and the base slab levels.

Horizontal soil movements along Longwood Avenue were slightly larger reaching up to 0.6" ten feet below the ground surface. Slurry wall deflections at the Longwood panels were also moderate reaching up to 0.84" between the fourth and the base garage slab. At the base slab elevation the maximum horizontal soil movements was 0.25" and the corresponding wall deflection was close to 0.75".

Typical building settlements were small to moderate with the exception of the MCA facade. The MCA facade settled as much as 1.4" but close to 0.4" of this settlement occurred before any foundation construction probably due to the demolition of most of the MCA building. Buildings supported on shallow foundations closer to the east face of the excavation had moderate settlements. The southwestern corner of the Kirstein Building settled close to 0.8" (closer to the excavation) and the Beth Israel garage settled up to 0.5". The Kirstein building was founded on spread footings while the Beth Israel garage has pressure injected footings at 20' below ground surface, while other buildings settled less than 0.2". Overall, performance of the BID foundation system was satisfactory since most slurry wall deflections and adjacent building settlements ranged from small to moderate values. 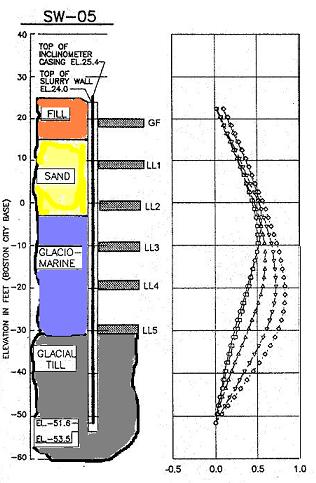