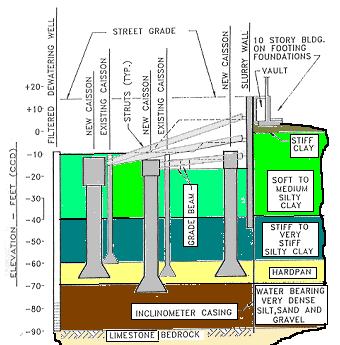 The AT&T Corporate Center is a 60-story composite office tower with an attached 16-story low-rise and two basement levels. It is located at the southeast corner of Monroe and Franklin Streets. The presence of an adjacent 10-story structure supported on footings over soft clay required a conservative slurry wall design, construction and bracing. Subsurface conditions consist of fill, thin clay crust, soft to medium clay, stiff to very stiff silty clay, hardpan, and water bearing very dense silt-sand & gravel, which is typical of downtown Chicago.

A principal concern in this project was the effects of excavating a 2-level basement on the movements of the 10-story building on the east (Fig. 5.17). It was felt that settlement of this building would be anticipated, regardless of whether the building was underpinned or whether a stiff retention system was adopted (Baker et al., 1987). A 30"-thick slurry wall constructed in 7' to 9' long panels was chosen on the east side of the project. On the other three sides a 2' thick slurry wall was used constructed in normal 20' to 22' panel lengths. The slurry wall extends from street grade at El. +14 ft CCD to elevation El. -45ft CCD. 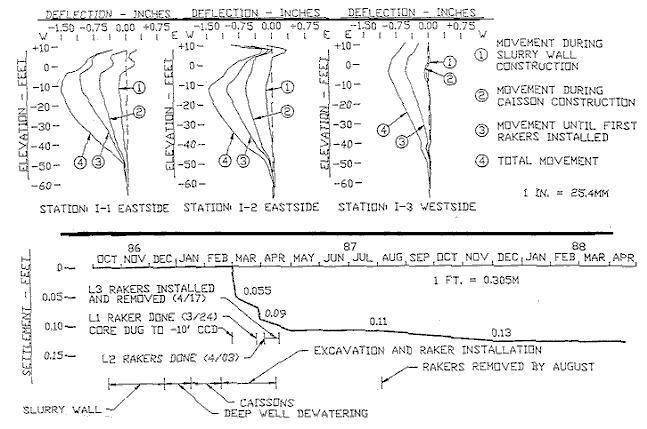