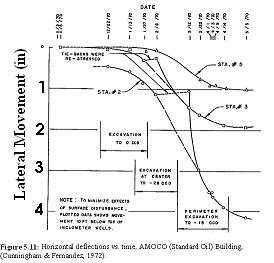 The Standard Oil Building is an 80-story steel "tube" building placed near the center of a 5-story reinforced concrete plaza structure. There are two separate buildings although they function as a single unit. The project is located at 200 East Randolph Street in Chicago, Illinois, covering the entire city block bounded by Randolph Street, Stenson Avenue, Lake Street, and Columbus Drive on the south, west, north and east (Cunningham & Fernandez, 1972). The project consists of a high-rise and a low-rise portion that are supported separately due to dissimilarity of loading and boundary conditions. Caissons extending to hardpan and rock were used to support these two areas.

Movements at the top of the slurry wall reached up to 4.6" at one station (Sta. #2) while other inclometers measured deflections close to 2" at the top of the casing (Fig. 5.11). Cunningham and Fernandez [1972] reported deflection data 10' below the top of the casing in order to minimize surface effects. Soil movements started as soon as the center of the site was excavated to El -26ft CCD even while a 25' wide berm was left in place. Apparently the berm was not sufficient to restraint deformations since movements increased by as much as 0.8" during this period. Movement continued as the perimeter was excavated to El. -15ft CCD. Movements did not stabilize until some time after removal of the berm was complete. Although tiebacks were restressed on several occasions, actually pushing the wall back somewhat, the average rate of movement did not seem to change. This indicates that re-stressing of the tie-backs provided only temporary restraint to the movement that was initiated by a change in the stress equilibrium of the soil mass, and the movement stopped only after a new state of equilibrium was reached (Cunningham & Fernandez, 1972). Most of the slurry walls translated and rotated about their toe, with very little to no wall bending evident. The horizontal toe translation was in the order of 1.0".

Considerable difficulties were experienced in compacting the backfill between the slurry wall and the deadman sheetpile wall (installation of tieback rods), due to freezing weather and/or water. This was particularly true along the east and south walls, and resulted in relatively poor compaction of the backfill with the exception of a 20-ft strip in front of the deadman wall, where select and relatively dry material was utilized. It is possible that large movement along the east wall may have been partly due to this condition.

Significant lateral movements were observed to a considerable depth. In stations 2, 3, and 4 the slurry wall had clearly rotated about its base since there was no sign of bending at any elevation higher than El. -32ft CCD. This clearly indicates that the embedment of the slurry wall was not enough to restraint movement of the stiff slurry wall. As it is shown in Figure 5.10, the slurry walls were embedded in medium clay; clearly this clay did not possess enough strength to resist the lateral loads imposed on the slurry wall. 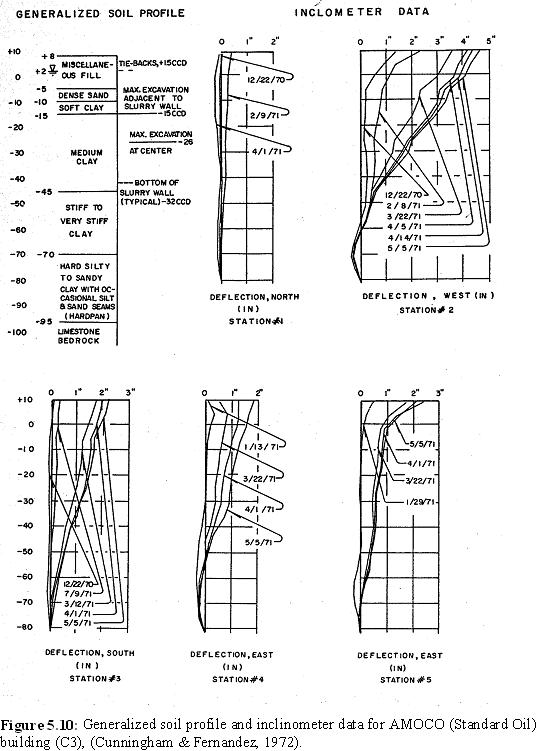