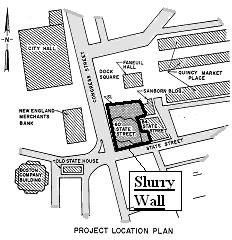 The 60 State Street building is a 38-Story office tower located at the northeastern corner of Congress and State Streets in Boston, Massachusetts. Foundation construction for this project took place in 1975. Many important structures and historic sites surround the building such as the Boston City Hall, the Government Center Complex, the Old State House, Faneuil Hall and the Quincy Markets area. To the east of the project is an 11-story office building at 84-State Street and the 5-story historical Sanborn Building. The MBTA subway passes beneath State St. on the south side.

A three-level deep basement extends to the property limits on all sides and includes an area to the north under the plaza level. The 500-ft high tower, located in the center of the project, is supported on a mat foundation on glacial till, 35' to 50'. below street level.

A tied-back perimeter 2.0'-thick diaphragm wall was selected to provide temporary and permanent earth support as well as water retention. The slurry walls extended to bedrock and thus provided a seepage barrier. Using inclined tiebacks prestressed at 100% of their design load the need for braces and struts was avoided. No underpinning of adjacent structures took place and the construction was completed with a minimum of noise and disruption to this congested neighborhood.

Two levels of temporary soil tiebacks were used to hold to slurry walls as the excavation progressed to a final depth of roughly 30' to 37' depending on location. Permanent bracing was provided by the two interior floors and the basement floor slab.

The 60-State Street slurry wall excavation support system performed well since excavation induced movements and adjacent building settlements were small to moderate. Soil movements during trenching were small towards the open trench (up to 0.25"). These movements reversed after the panels were concreted to very small values and sometimes the net soil movement was away from the concrete filled trench.

Larger movements occurred in the initial stages of the excavation despite the fact that the slurry walls were embedded in dense glacial till. Including the effect of the wall rigidity, the cantilever movements reached up to dW=1.3" at the top of the slurry wall (initial stages). This was surprising since the excavation had only been carried to a depth of 10 to 12'. Wall bending developed as highly prestressed tiebacks were installed, in some cases the wall moved further into the soil than its initial profile. Subsequent building settlements were roughly the same as maximum wall movements at respective locations. Building settlements near the excavation typically ranged from ½" to 1" and gradually diminished with increasing distance from the excavation. However, some of the settlement might be caused by the tieback drilling procedures and may not be due to wall movements.

Tiebacks were drilled using water and air through a 4"-steel casing and generally performed well. The upper level of tiebacks showed an initial load loss of up to 28 Tons which was more than the theoretical 8 Ton loss resulting from elastic tieback shortening. It was assumed that yielding in the grouting zone and seating losses were the causes of these load losses. The lower level of tiebacks showed slow progressive load decay that matched the theoretical load loss resulting from elastic shortening.

Sumps and small trenches were used to dewater the excavation. The actual volumes of water were minimal as described by Johnson. Data regarding soil cave-ins during slurry wall construction or wall leaks could not be retrieved. 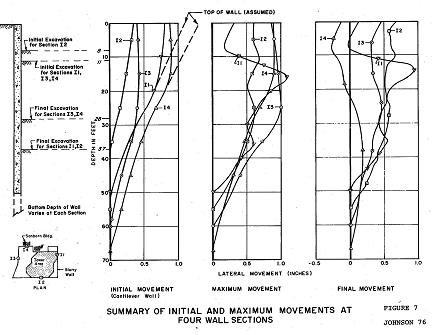