Use of the Soil Mix Walls

Soil mix walls are constructed by mixing and partly replacing the insitu soils with a stronger cement material. Various methods of soil mixing such as mechanical, hydraulic, with and without air, and combinations of both types have been used widely in Japan for about 20 years. Soil mixing has been used for many temporary and permanent deep excavation projects including the Central Artery project in Boston. Known methods include as Jet Grouting, Soil Mixing, Cement Deep Mixing (CDM), Soil Mixed Wall (SMW), Geo-Jet, Deep Soil Mixing, (DSM), Hydra-Mech, Dry Jet Mixing (DJM), and Lime Columns. Each of these methods aims at finding the most efficient and economical method to mix cement (or in some cases fly ash or lime) with soil and transform soil to become more like a soft rock.

Unreinforced soil mix walls are typically used as hyrdaulic barriers. In some cases they are also used as retaining walls, especially if constructed as massive blocks or other element types. In such a case, the tensile strength of the soil mix is typically the one controlling the structural soil mix wall capacity. If a soil mix wall is reinforced with a steel beam, then it is typical to calculate the wall capacity using only the steel beam strength and in essence consider the soil mix as lagging.

Mechanical soil mixing is performed using single or multiple shafts of augers and mixing paddles. The auger is slowly rotated into the ground, typically at 10-20 rpm, and advanced at 2 to 5 ft (0.5 to 1.5 m) per minute.

Cement slurry is pumped through the hollow stem of the shaft(s) feeding out at the tip of the auger as the auger advances. Mixing paddles are arrayed along the shaft above the auger to provide mixing and blending of the slurry and soil. Slurry lubricates the tool and assists in the breaking up of the soil into smaller pieces. Spoils come to the surface since fluid volume is being introduced into the ground. These spoils comprise cement slurry and soil particles with similar cement content as what remains in the ground. After final depth is reached, the tools remain on the bottom of the hole, rotating for about 0.5 to 2 minutes for complete mixing. At this point, the tools are raised while continuing to pump slurry at a reduced rate. Withdrawal is typically at twice the speed of penetration, 4 ft to 10 ft (1 m to 3m) per minute.

Steel beams are typically inserted in the fresh mix to provide reinforcement for structural reasons. A continuous soil mix wall is constructed by overlapping adjacent soil mix elements. Soil mix sections are constructed in an alternating sequence with primary elements being formed first and secondary elements following once the first have gained sufficient strength.

The soil mix method can be very effective at providing very stiff and waterproof retaining systems. However, it is rather limited to medium and large-scale projects because of its high mobilization costs. Insufficient mix strength may result when mixing organic soils unless a high replacement ratio is maintained. Other issues such as difficulties in maintaining consistent compressive strengths throughout the section of a soil mix wall can also emerge. 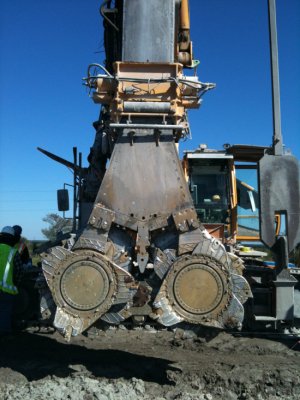 When soil mix mass strengh is tested, the core sampling size plays an important role. Because the soil mix will never be uniform throughout the wall length, smaller samples tend to produce a greater variability on insitu strengths whereas increasing the sample size (within reason) will produce more consistent test strengths. 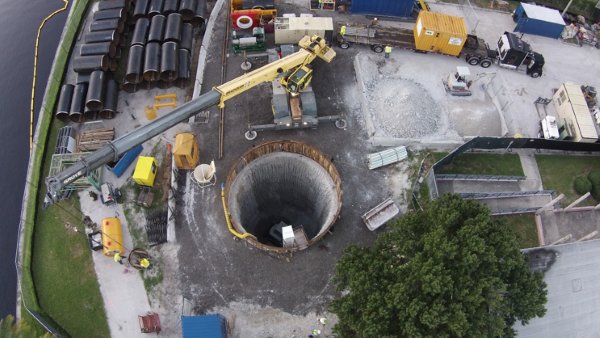