Increased congestion in urban cities has caused an increased demand for underground space (typically underground parking, infrastructure, or facilities). For typical high rise buildings the developer selects an architect who is responsible for presenting an overall concept for both the superstructure and substructure.  While the superstructure is the prime turf for architects, geotechnical/foundation engineers are the experts for the substructure. Too often original architectural proposals include poor recommendations for basements that have adverse effects on the overall project. Do not despair, there are actions that as a leading architect you can take to make your project more efficient. Here are some ideas that you can adopt:

1. Involve a geotechnical engineer/deep excavation expert early in the game:

The importance of involving a geotechnical engineer early in the game cannot be but overstressed. They should have the expertise to deal with deep basements and all necessary geotechnical aspects. The geotechnical engineer will identify potential options for temporary and permanent earth support and can guide initial concepts in the right direction.

A scenario to avoid: Imagine this, you have envisioned initially a 0.6m (2ft) temporary basement wall and based on this you have prepared all your basement and structural drawings. After all drawings are ready, you get a geotechnical engineer and he tells you that you need to have a 0.9m wall (3ft). Now all your drawings need to be redone, and you are delivering less space to the client than you promised.

Identify what the developer is willing to spend for their underground space. How quickly do they want to create their superstructure. Would it be better to construct the excavation concurrently with the superstructure? These options allow both architect and engineer to propose different construction methodologies.

3. Do a preliminary geotechnical investigation:

We have seen a great share of proposals made with no or very limited geotechnical information. Get your geotechnical info early on the game. This will minimize many foundation related risks and will allow for a better proposal to be made. Be aware though, we have seen many geotechnical reports with practically no real engineering data, even from big companies as they are looking to minimize their risk exposure rather than offer real design parameters. As architects you also have to convince your clients that money spent early on geotechnical information is money well spent.

So your building has a strange perimeter, shape, in simple wording it is elegantly shaped. Your basement perimeter does not have to follow every kink or strange shape. We have often seen Keep it simple, not only will you get more space, but you will also save the project money, time, and headaches.

The following plan presents such a sample case to avoid. The architect wanted an elevator shaft. Instead of following the property line and making the west wall a single line the architect selected early in the game to follow the building perimeter. This little part is a pain to construct. 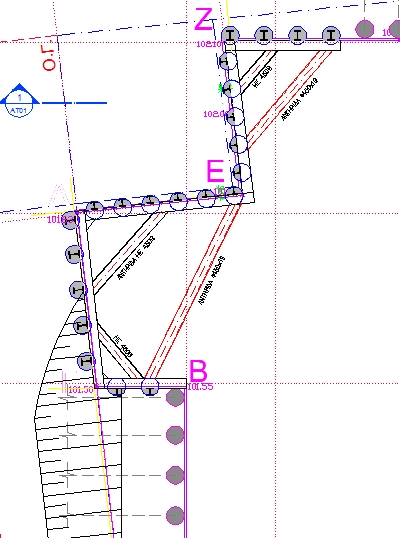