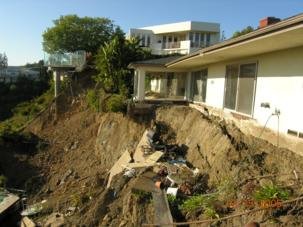 Slope instability can be manifested as landslides—including mudflows ("mudslides") and rockfalls—or by more subtle processes such as soil creep. Slope instability is a complex phenomenon that can occur at many scales and for many reasons. Landslides can be fast or slow, wet or dry, small or large, shallow or deep, old or recent. Examples of triggering mechanisms include earthquakes, grading, poor surface drainage, erosion, rainstorms, landscape irrigation, or broken utility lines. Fast-moving mudflows and debris flows are of particular concern in wildfire burn areas and in areas that have previously experienced landslide activity.

Buildings and infrastructure located on or in the path of a landslide can be seriously damaged or destroyed. Slope movements do not need to be large to be destructive—even slope creep or small, early-stage landslide movements can cause substantial structural damage to critical facilities such as dams, resulting in major economic damage and loss of life. Conversely, earth movements initially suspected to be caused by landslides might instead be the result of other processes such as fill settlement, shrink-swell action of expansive soil, or hydrocompaction of collapsible soil.

Our engineers utilize many tools to investigate all aspects of slope instability. Key elements in the investigation include determining the boundaries of the slope instability, establishing a history of previous slope movement, assessing landslide causation, modeling landslide initiation as well as the travel paths taken by moving landslide debris, assessing the damage to affected buildings and structures, and preparing recommendations for stabilizing slopes. 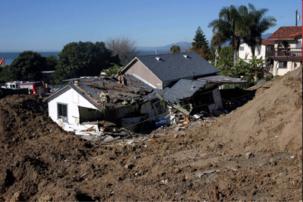