You would tend to think that AASHTO LRFD is always extremely conservative for deep excavations. After you read this article you will find out that this is not always the case. The main issue with LRFD is that it's recommendations have their origins directly in a structural engineering approach of a non-linear elastoplastic problem. AASHTO LRFD refers to FHWA apparent earth pressure diagrams that have been primarily calibrated against measured support reactions. As we have demonstrated this approach can be very unconservative when any sort of realistic soil property is assumed.

We have benchmarked six multi-level-braced excavations in the United States (Figure 1) against measured wall deflections with a non-linear elastoplastic solution. The results for the different load combinations or design approaches are summarized in Table 1. The benchmarked excavation models were then reanalyzed with AASHTO (2010) LRFD combinations and Eurocode 7 design approach ultimate limit state methods,  with a non-linear solution and with a limit-equilibrium method as proposed by FHWA (1999). 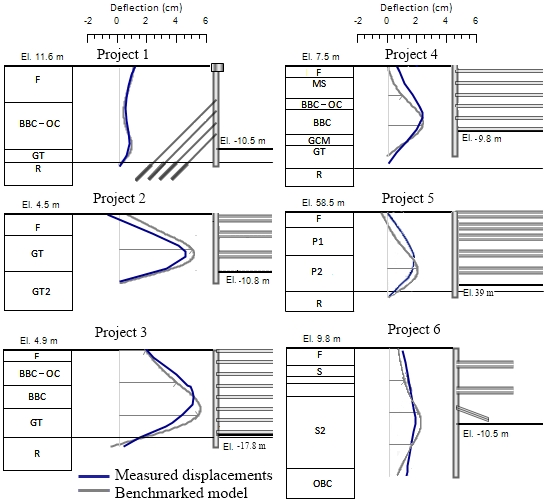 For the non-linear analyses the wall bending moments safety factors typically range from approximately 1.24 to 1.39 while safety factors on support reactions ranged from 1.01 to 1.43. In cases 1-I, 1-II the rock anchor prestress seems to lock-in the support forces and thus the "factored" anchor reactions are essentially the same as in the service condition.

When the same projects were reanalyzed with the FHWA (1999) limit equilibrium method using benchmarked soil properties, the computed bending moments range from 19% to 68% of the benchmarked maximum wall moment. At the same time, computed support reactions range from 53% to 205% of the corresponding non-linear solution values. In projects 2,  5, and 6 while the computed support reactions were very similar between the limit-equilibrium and the non-linear methods, the bending moments in the limit-equilibrium were still significantly smaller.

In some cases LRFD computed support reactions and wall moments calculated with limit equilibrium methods are only slightly greater than the corresponding unfactored load case. This behavior can be explained by the fact that high water tables are present in all projects but AASHTO (2010) LRFD does not directly factor water pressures (which forms a theoretically consistent practice since vertical effective soil stress depends on the water pressure).

While Eurocode 7 design approaches also exhibit scatter in the obtained results, the provision that allows results to be amplified appears to provide significantly more consistency when compared to AASHTO LRFD methodologies. Design Approach EC7-DA1/1 appears to give proper safety factors on wall moments and support reactions, while the DA2 approach generally gives adequate safety factors for wall embedment. From all design approach cases, EC7* appears to be the most consistent and comprehensive as it allows only one main analysis to be performed. The main criticism though for EC7* is the extreme conservatism on the passive soil resistance, which should be revised to obtain more reasonable wall embedment safety factors.

Based on a wide number of other analyses reviewed by the author (not presented in this publication), simpler excavations with 2 or fewer support levels (or none) tend to exhibit smaller differences between limit-equilibrium and non-linear analysis methods. In such cases AASHTO LRFD methodologies tend to produce more consistent results, albeit very conservative when compared to traditional allowable stress design methods. 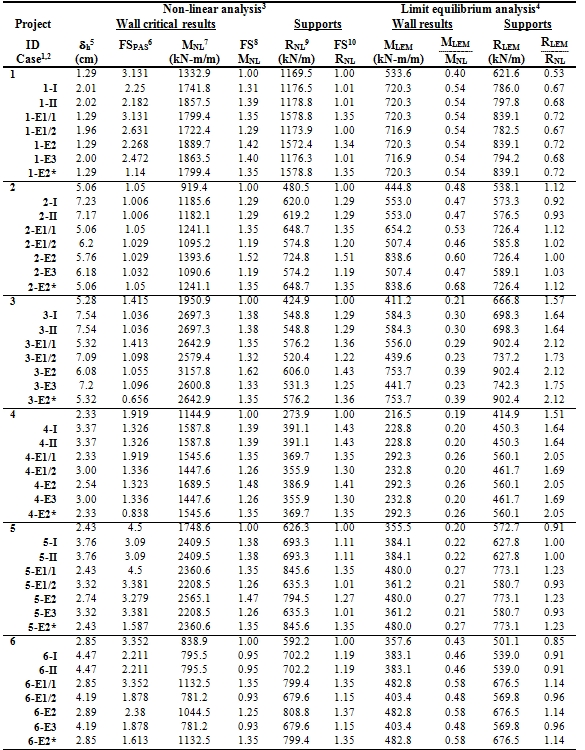 If you have to use AASHTO LRFD, we first have to wish you good luck. Most officials do not have the authority to superceed or understand the limitations inherent with LRFD.

The currently adopted design methods for AASHTO (2010) LRFD appear to produce inconsistent and possibly unsafe designs for many multi-level braced excavations. Limit-equilibrium analyses combined with LRFD methods appear to severely underestimate benchmarked wall bending moments. For this reason, analyses in this paper suggest that limit-equilibrium methods should not be used to design the wall bending resistance for multi-level-braced excavations.

Selected design approaches from Eurocode 7 ultimate limit state methods appear to provide a more theoretically consistent framework and results. Thus, this analysis exercise strongly suggests that the application of AASHTO (2010) LRFD design procedures for braced excavations needs to be officially revised so that safe and consistent braced excavation designs are produced. In the author's experience, LRFD practice can benefit by adapting the best parts of current Eurocode 7 design methods to US realities. In this approach,  a designer can first perform an equivalent standardized analysis and then obtain the limit state design values by amplifying the initial results.