Talking to the wall - AREMA Specifications

Discussing earth retaining wall design issues with transportation or railway authorities sometimes feels like talking to a wall. Transportation officials basically have their hands tied by code or design manual, even when the code is taken out of context. An example of such case is the AREMA manual specifications for lateral surcharges on retaining walls. Most times the specifications are taken out of theoretical context and this results in significant over conservatism for shallow excavations.

The lateral loads on retaining walls by AREMA have their theoretical background in theory of elasticity for rigid walls. However, as most of us know, soil is far from an elastic medium, and most shallow temporary excavations are far from rigid. This issue causes significantly increased costs for temporary excavation support works next to railways.

Figure 1 displays an excerpt from "Soil Mechanics Fundamentals", Isibashi, I, Hazarika, H, 2011 describes how Boussinesq loads are doubled to get  the lateral load for non-yielding walls. Lateral loads in AREMA describe conditions for non-yielding walls as it is apparent from the (2q/ᴨ) term (Figure 2). When soldier pile walls are employed to provide shoring support they are generally treated as flexible wall systems. For this reason, the two factor can be omitted if Boussinesq equations are utilized.Case 1: To double or to not Another not obvious limitation of equations by theory of elasticity is that surcharges near the top of the wall tend to be overestimated in cases  similar to the current project. Boussinesq assumes that soil acts as fully elastic medium. This assumption is not really valid as soil cannot transfer tension beyond the distribution angle as shown in Figure 3. In such cases the distribution angle approach produces much more realistic surcharge effects compared to the elasticity approach as shown in Figure 4. 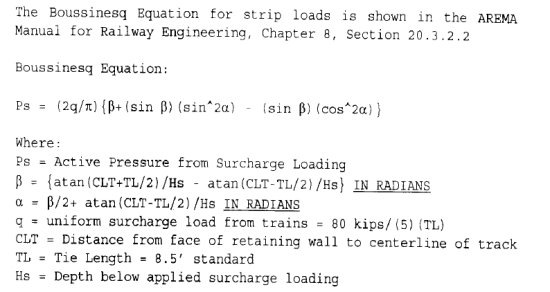 Figure 2: AREMA Equations for lateral surcharges according to theory of elasticity. 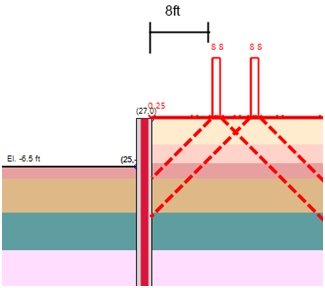 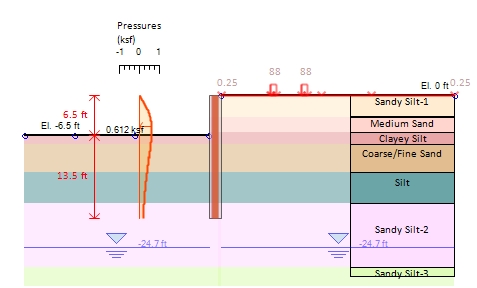 In the distribution angle approach, surcharge effects are first added on vertical stresses before the lateral effect is calculated. We believe that in the current project the distribution angle methodology produced much more realistic surcharge effects, given that the railroad loads are beyond the active zone of movements (as formed from the final excavation line). In this case, AREMA loads for non-yielding walls are not justified as they will produce an uneccerily overconservative solution for a very shallow excavation.

Use of theory of elasticity in AREMA can result in significant and unwarranted overprediction of lateral surcharges by rail load loading. On the other hand, officials are tied up by specifications and will likely never accept any scientific evidence to the contrary. The result? Most designs for shallow temporary excavations next to railways carry a significantly increased cost due to the unnecessary conservatism.

In a case like this, trying to talking to officials and clarify this issue is like "talking to the wall".