A. Limit-equilibrium with German EAB methods without wall friction

A 7.3m deep excavation was constructed in Berlin using a soldier pile and tremied concrete wall supported by one level of prestressed ground anchors at 3.2m horizontal spacing. The wall was reinforced by double HE 450A steel beams that extended 12.2m with the remaining 4.9m of the wall only extended as a cutoff. Soils at the site consisted primarily of sands and the water table was approximately 2m below the ground surface. 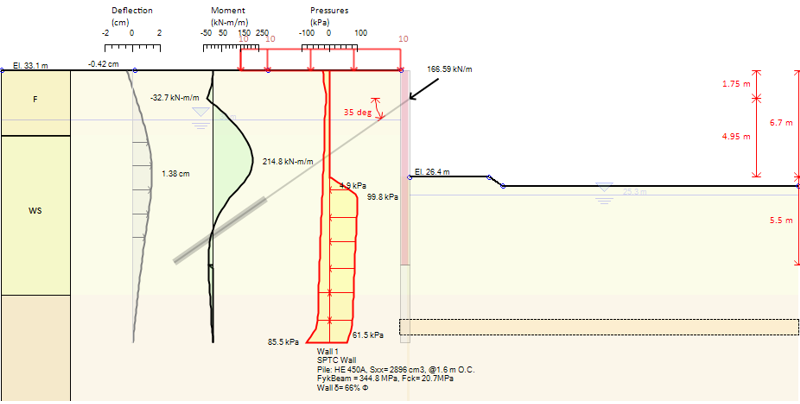 A 20.55 deep excavation in Qatar was constructed with a 900mm secant pile wall with secant piles at 1.3m spacing. Local geological formations consisted of fill, weathered limestone, un-weathered limestone, shale, and RUS formation. The design water level was 0.8m below the ground surface. The wall was supported by four levels of prestressed ground anchors. The current article compares different analysis results for the original design configuration. Last, the elevation of the ground anchors was varied to optimize wall bending based on the LEM method.

Overall, all methods produced very comparable bending moment and support reaction results. In the last stage, all methods gave similar magnitudes of maximum bending moments, albeit at different locations. In the LEM analysis, larger bending moments were obtained in the cantilever stage which is attributed to the theory of elasticity for surcharges, and the fact that no wall friction was included in the LEM. The LEM analysis also predicted larger support reactions on the 3rd level of ground anchors whereas in the NL and FEM a smaller prestress was applied at those levels.

In the FEM analysis, larger moments were observed vs. other methods on the stage before the installation of the 2nd ground anchor. FEM horizontal wall displacements were larger vs. the NL results, but at the same time, the FEM model produces toe movement of about 0.75 cm which typically does not materialize in the RUS formation. 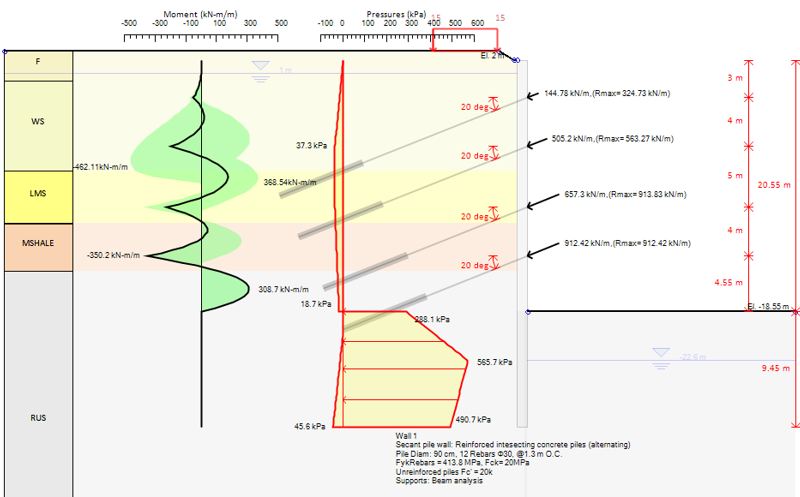 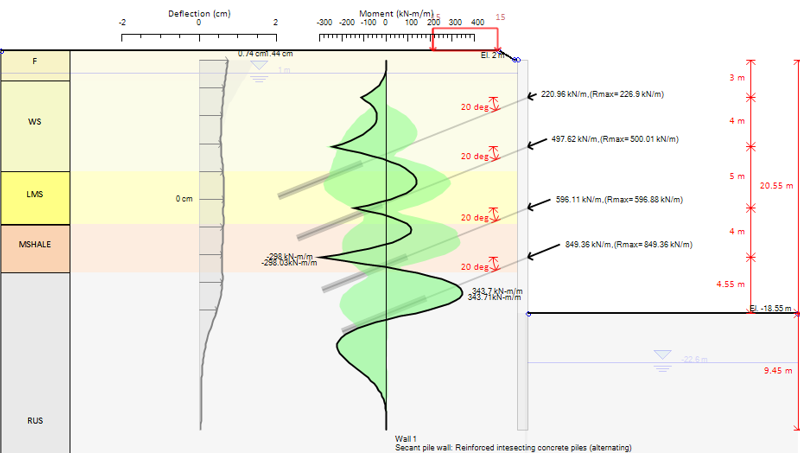 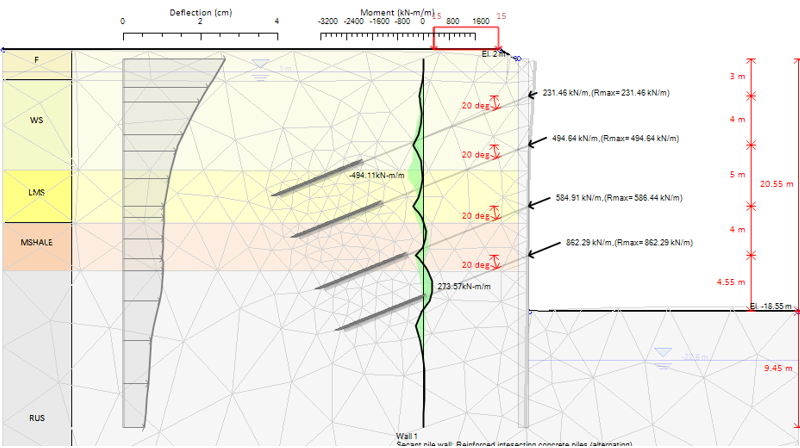 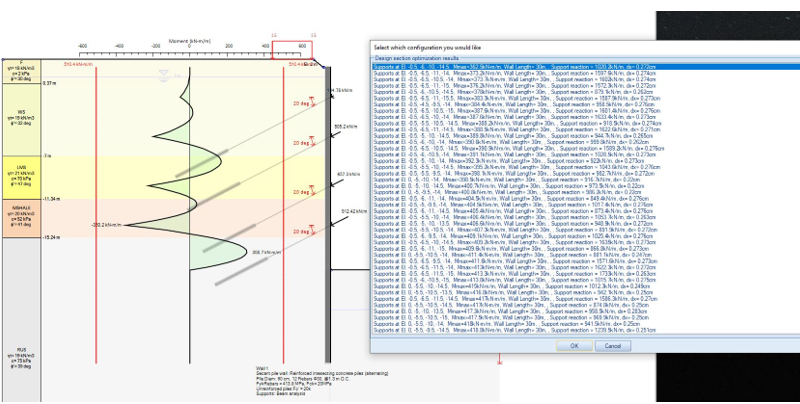 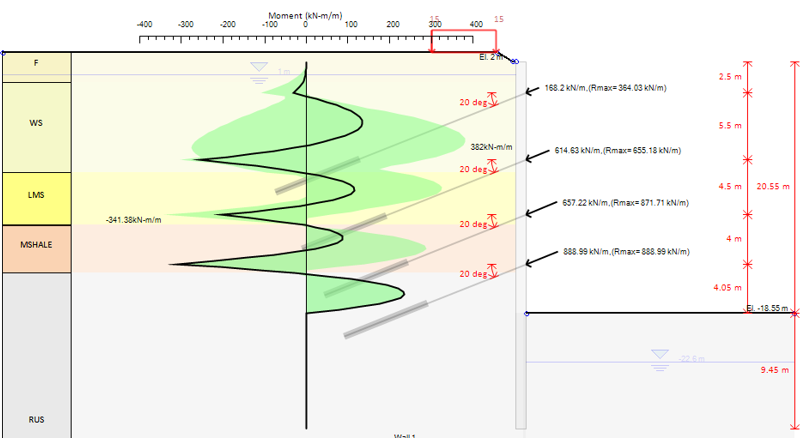 Figures 3.1 through 3.3, compare results between the different analysis methods for the reported optimized section considering a 0.5m over-excavation. The LEM-EAB approach generally produces slightly greater bending moments and support reactions vs. other methods. Lateral wall displacements between the NL and FEM methods were very comparable, especially if toe movement is adjusted for the FEM results. The FEM analysis produced higher negative bending moments at the Limestone interface after the prestressing of the 2nd ground anchor which the LEM method is unable to predict. 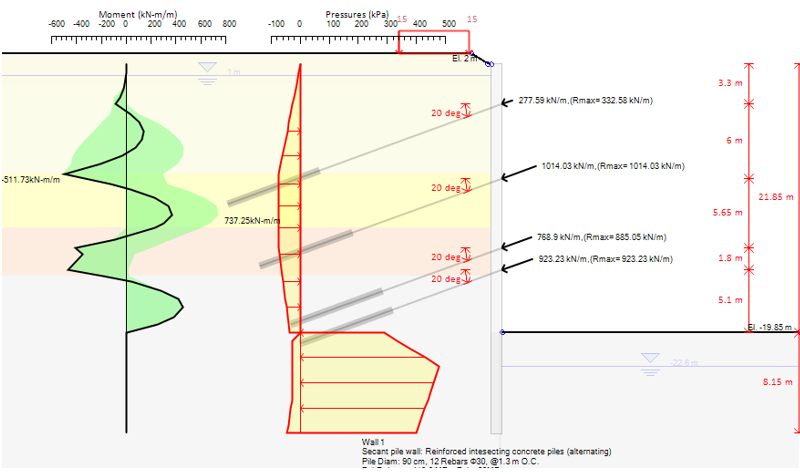 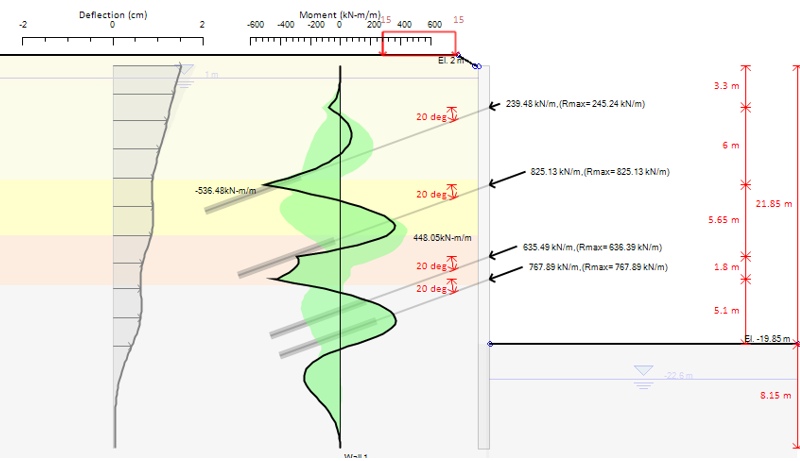 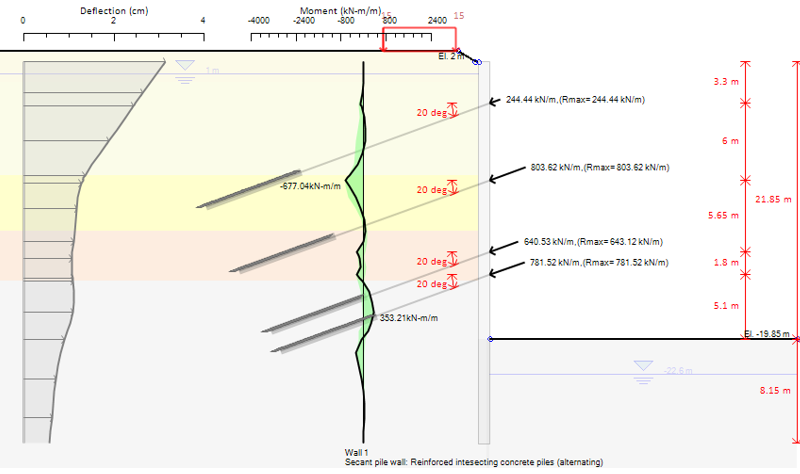 In the examined deep excavations, the EAB, NL, and FEM methods all produced similar maximum moments and support reactions. In the LEM approach, more conservative results are obtained when wall interface friction is ignored, whereas, in the FEM method wall friction must be included by default otherwise the analysis does not converge. The current analyses hint that most LEM apparent pressures have been developed without the inclusion of wall interface friction. Since prestress levels for the FEM and NL analyses were set at 80% of the LEM reactions, one could rightfully argue that the corresponding NL bending envelopes are almost a self-fulfilling prophecy.

When results between LEM, NL, and FEM are comparable, brute force optimization can be carried out more quickly in limit-equilibrium analysis versus other methods. Last, the examined case studies highlight the fact that one should not skip traditional design approaches and solely rely on more advanced analysis methods. 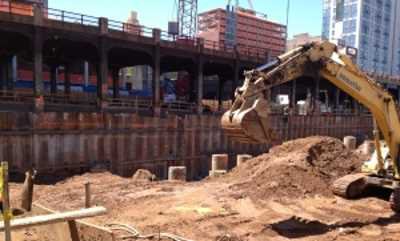 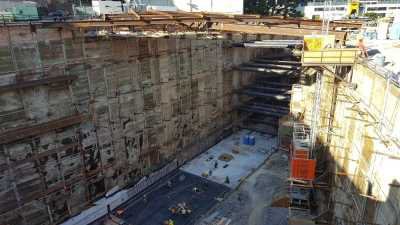 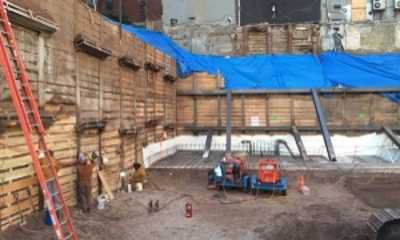