Thanks to Dimitris Zeccos for contributing this case study. The complete thesis is available at: 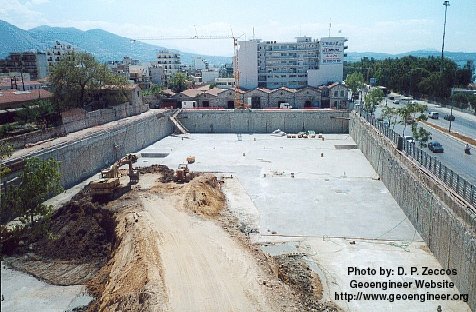 The site of the excavation is located in the coastal area of the city of Patras, Greece, where an entertainment/amusement center (BESO MARE) with an underground two-story parking garage was recently constructed. The case of a supported, 7.5m deep, excavation in soft clayey-silty soil is studied.

The soil profile at the project site consists of alternating layers of soft clayey/sandy silt down to 12.5m from the ground surface, where a dense well-graded sandy-gravelly layer is encountered. The water table is located at a depth of 1.20m below ground surface.

The plan dimensions of the excavated area were 130m by 60m and the surrounding soil masses were supported by a reinforced concrete diaphragm walls (to a depth of 12.5m) anchored at the level of 2.20m by prestressed tiebacks at an average horizontal spacing of 1.75m.

Measured Performance of the Diaphragm Wall

The lateral deformations of the support system were measured by taking inclinometer measurements at two of the sides (short side and long side) of the excavation. The inclinometer casings were installed vertically at the interior of the diaphragm walls and far from the corners. The inclinometers measurements were taken at the following stages : before excavation, at excavation level of –2.20m (before and after prestressing the tiebacks) and at final excavation. The maximum measured values of lateral deformation were found to be 3mm and 19mm for the cases of the long and short sides of excavation, respectively.

The behavior of the supported excavation was modeled by the FEM code under plane strain condition. The analysis took into account all the successive stages of the excavation and installation of anchors whereas the selection of soil properties used in the calculations was based on the results of the geotechnical investigation performed at the site.

Results of measured vs. predicted behavior of the Deep Excavation Support System

A comparison between measured and estimated values of lateral deformation showed relatively good agreement concerning both the distribution of deformations with depth as well as their corresponding magnitudes.